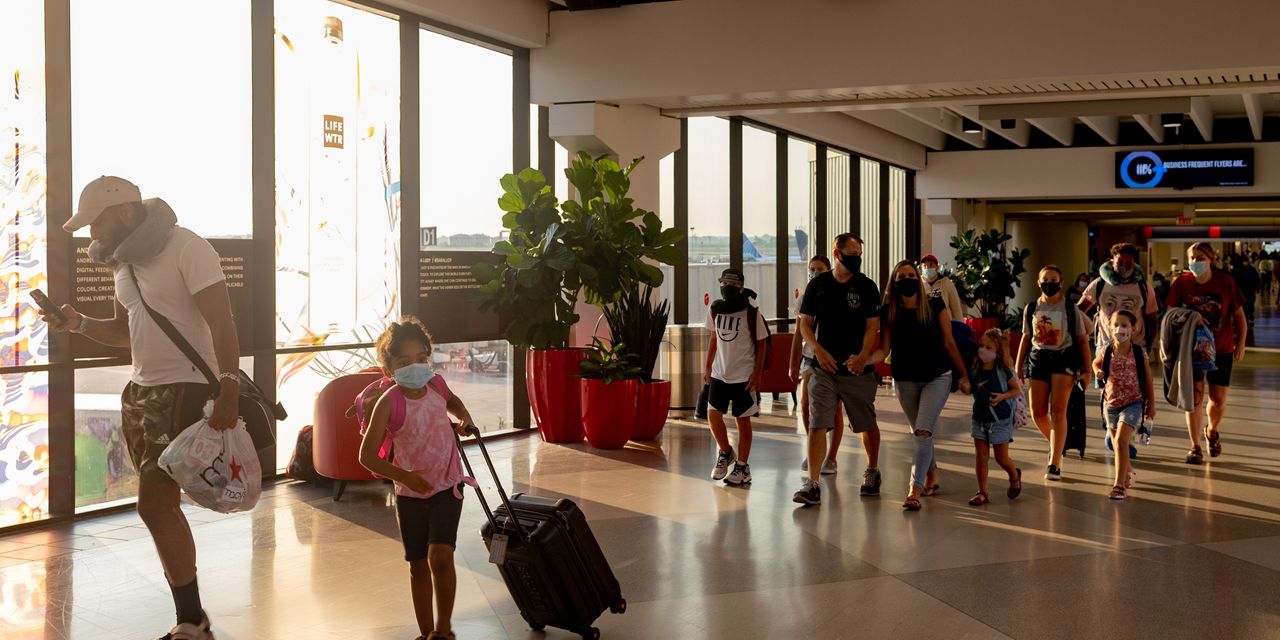 Repercussions from the Delta variant of Covid-19 are starting to ripple across companies, raising staffing costs in senior housing, disrupting production of potato chips and leading some companies to rein in profit projections.

Still unclear: whether the highly contagious strain of the virus will be a momentary stumble in an improving global economy—one that businesses and consumers are now better equipped to handle—or something more serious.

And, as more employers postpone their return to offices, the outlook is darkening for such disparate companies as a 25-person Houston cable installer and a company with a $1.3 billion market-capitalization that sells paper goods and cleaning supplies.

“We were on a good trajectory, and then the Delta variant showed up and we’ve taken a step back as a result of that,”

chief executive of meat processor Tyson Foods Inc., told investors last week. The company, which said early this month that it would require workers to be vaccinated, has seen efficiency drop as absenteeism rises, Mr. King added. “Essentially, it takes us six days to get five days worth of work.”

The setbacks come after a spring and summer that seemed to promise a rapid, uninterrupted recovery with wider vaccinations. Then at the end of July, as reports of the Delta variant spread, the Centers for Disease Control and Prevention reversed earlier guidance and recommended that vaccinated Americans wear masks indoors where Covid rates are high. Consumers began pulling back.

Traffic at grocery stores, gas stations, gyms, restaurants and retail stores fell starting in late July, after surpassing 2019 levels earlier in the summer, according to mobility metrics from data firm SafeGraph. Weekly domestic flights declined last week, for the second time since mid-April. The median number of trips Americans took at least 10 minutes from home also declined in July, data from the Bureau of Transportation Statistics show. Workplace visits leveled off last week after mostly rising for months, according to data from Brivo, which tracks the number of times people use credentials to gain access to commercial buildings.

Small-business confidence fell in August to its lowest level since March, with 39% of owners expecting U.S. economic conditions to improve over the next year, down from half in July and two-thirds in March, according to a survey of more than 560 small businesses for The Wall Street Journal by Vistage Worldwide Inc.

The Houston company stayed busy at first during the pandemic, as customers continued existing projects. Work ground to a halt early this year, as companies held off on office-space changes, owner Tarin Williger said.

About three months ago, as many companies began mapping out a return to their offices for September, they started discussing plans to move, expand or remodel—all of which can require new cable runs. Now, many of those plans are on hold again.

“What we really need is people to go back to work to get business,” Ms. Williger said.

A survey of consumer sentiment by the University of Michigan, released on Friday, fell 13.5% in the first half of August from July, one of the sharpest declines since the index began tracking on a monthly basis in 1978.

The stock market, while up nearly 20% for the year overall, is sending uncertain signals. This summer, stocks seen as benefiting most from a recovery fell more than broader economic indicators would have warranted, in part on uncertainty over federal spending plans, said Keith Parker, head of U.S. and global equity strategy at UBS. Those declines have largely leveled off, but haven’t reversed.

There are signs that Delta’s economic impact could remain limited. The number of Americans who aren’t working for fear of getting or spreading the coronavirus has continued to decline, to 2.5 million adults in late July and early August from 2.8 million a month earlier and 5.5 million in January, a U.S. Census survey found. New unemployment claims have remained roughly level since May, and robust job growth and falling unemployment in July suggest the labor market remained strong just ahead of the latest pandemic wave.

Companies have continued to conserve cash, a factor that helped many big businesses weather 2020. Households, too, have more of a cushion, built up as many paid down debt or amassed savings during the pandemic, with help from federal stimulus spending and lower travel and dining spending. As of June, American households had saved $2.5 trillion more than might have been expected absent a pandemic, consulting firm Oxford Economics estimated.

And consumers appear eager to spend, including on categories hit hard by Covid-19, such as vacation travel, restaurants and bars—though they may wait out the current spike in infections, UBS’s Mr. Parker said. Those spending plans are reassuring, he added.

“It signals that consumers, after a year-and-a-half of living with Covid cases spiking and coming down, seem willing to spend and maybe look past this recent wave,” Mr. Parker said.

Travel and hospitality are among the industries most affected by the Delta variant. Spending on air travel and cruises has dropped sharply since early July, after recovering steadily throughout the spring and early summer, according to credit- and debit-card data tracked by Earnest Research.

Spending on hotels has largely held up so far. But trade shows are getting canceled. And the number of diners seated at restaurants tracked by online reservation platform OpenTable was 9% below 2019 levels for the week ended Thursday, after surpassing 2019 levels in late June. New Orleans, Houston, Atlanta and other Southern cities have been among the hardest hit. Borrowing costs for travel and leisure companies are rising.

The company launched a weekly “travel sentiment” newsletter in March 2020 after losing 70% of its contracts. The newsletter, intended for those in the tourism business, assesses how inclined people are to travel.

This summer, as travel began to pick up, she cut back to biweekly editions, and some customers dropped their subscriptions, figuring the worst was over.

“We thought we were recovering,” Ms. Francis-Cummings said. Her measure of travel sentiment has fallen for a month now, with business and international travel lagging more than leisure travel.

“If the travel industry isn’t healthy, as much as I can do, my business is just not going to be as healthy,” she said.

, said the company saw a modest decline in new net booking in July, as concerns about the Delta variant mounted, compared with June. But the company said its safety policies, including requiring cruise passengers to be vaccinated, along with strong bookings, would help see it through. He predicted the Delta variant’s impact would prove transitory.

“It’s going to run through the course of the population very, very quickly,” Mr. Del Rio told investors on Aug. 6. “We don’t think it will have lasting effects.”

Healthcare companies are monitoring the pace of elective medical procedures, which tend to be more profitable but also more readily canceled or postponed when infections rise. Becton Dickinson and Co., which makes medical supplies from syringes to infusion pumps, told investors on Aug. 5 that its own outlook, for 16.5% revenue growth for the year ending Sept. 30, assumes no broad restrictions on elective procedures from the pandemic.

“However, in the last several weeks, we are seeing some impact from the Covid Delta variant on elective surgeries in certain U.S. states,” Chief Financial Officer

a real-estate investment trust that leases facilities to nursing homes and senior housing operators. So far, its customers haven’t seen significant illness as a result of the Delta variant, executives said, attributing that to high vaccination rates among facility patients and residents, as well as protocols such as requiring staff and residents to wear masks.

At the same time, where tenants have required that staff be vaccinated, costs are rising as they add temporary and then permanent staff to replace those who refuse, Sabra Chief Investment Officer Talya Neco-Hacohen said on an early August call with investors.

warned that as more companies extend remote work, it could hurt results for its unit selling towels, tissues and break-room supplies to facilities in North America. The business generates about 15% of revenues for Veritiv, which has a market capitalization of about $1.3 billion.

A spokeswoman said the company’s main packaging business has performed well through the pandemic, and sales of hand sanitizer, protective equipment and similar products have helped offset declines in its facilities unit.

In the U.S., Delta is so far slowing activity by discouraging consumers and businesses from traveling or gathering, economists and executives say. Widespread government-mandated shutdowns appear unlikely, although some jurisdictions—including Louisiana, seven San Francisco Bay Area counties and Los Angeles, which have all instituted indoor mask mandates—are imposing restrictions, short of closures. Disney World now requires customers to wear masks indoors, as does Apple in most of its stores.

A handful of studies have used cellphone location data to show that Americans last year began staying away from businesses before government-mandated shutdown orders required it. During subsequent outbreaks, fear also appeared to be a major driver of consumer behavior, according Austan Goolsbee, a former Obama administration economist who wrote one of the studies with economist Chad Syverson. Both work at the University of Chicago.

“With the lower death rates, hopefully a resurgence of the virus now would freak people out less, but people shouldn’t kid themselves,” Mr. Goolsbee said. “If the surge in hospitalizations continues and the virus begins to rage out of control again, the recovery will be in danger.”

He added: “It wouldn’t have to collapse like in the spring of 2020. It could just stall out the recovery like what happened in November and December last year.”

—Jacob Bunge contributed to this article.