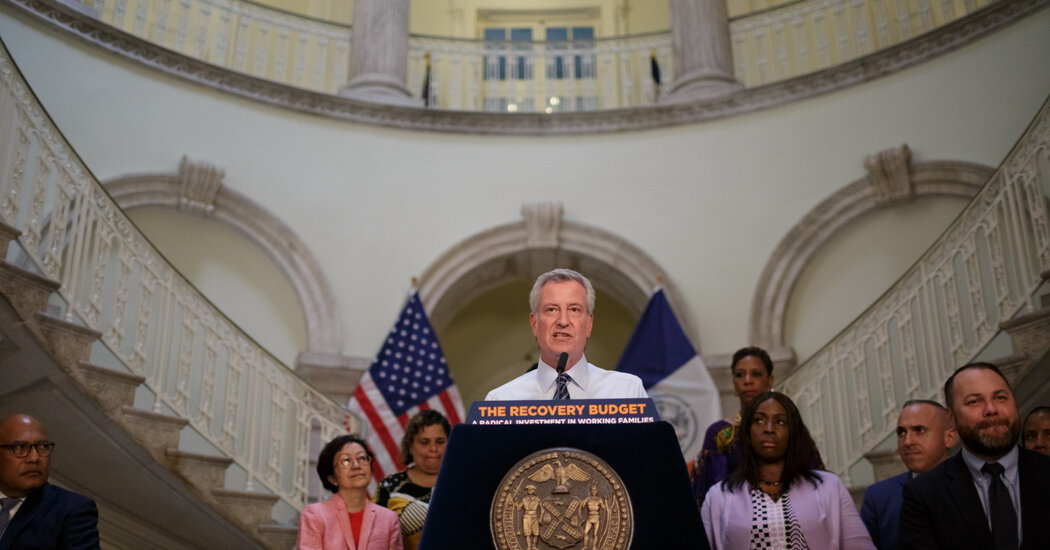 Last month, Goldman Sachs unofficially kicked off Wall Street’s return to the office in a celebratory mood. (There were food trucks and live music). The tone has since changed, as the highly contagious Delta variant spreads and nearly half of the U.S. population isn’t fully vaccinated.

That has led some companies to reconsider their reopening plans and rekindled the debate about whether to make vaccination mandatory. To date, most companies haven’t required returning workers to get inoculated. Will that change?

“We all but shamed people,” Johnny Taylor, the C.E.O. of the Society for Human Resource Management, said of companies cajoling and offering incentives for workers to get vaccinated. “But now we’re at a point that none of that’s working and we’ve got to close the gap.”

North Carolina-based Novant Health said last week that it would make inoculations mandatory after trying other ways to overcome vaccine hesitancy. As the Delta variant spreads, “the time was right to say, ‘We’ve got to move forward with requiring vaccines of our team members,’” said Dr. David Priest, the company’s chief safety officer.

“It’s time for more mandates,” Mayor Bill de Blasio of New York City said last week. Indeed, Kathryn Wylde, the president of the Partnership for New York City trade group, told DealBook that about a quarter of companies surveyed by the group said they would require employees returning to the office to be vaccinated. The vaccination rate for adults in New York City is 65 percent.

The largest firms have to take into account the uneven distribution of vaccine hesitancy across communities and the potential for political backlash. To take two of the city’s bigger employers:

Short of mandates, some are ratcheting up disincentives to remaining unvaccinated. Last week, the N.F.L. said that if unvaccinated players or staff members caused an outbreak that forced a schedule change, their team would be held financially responsible for all costs and potentially forfeit the postponed game.

Credit Suisse settles a spying case. The embattled Swiss bank resolved claims filed by a star wealth manager who defected to UBS and later said he had been spied on, a scandal that forced Tidjane Thiam to step down as Credit Suisse’s C.E.O.

Big cryptocurrency exchanges set caps on the size of customers’ trades. FTX and Binance said yesterday that they would reduce leverage limits for trading in crypto derivatives to 20 times, from as high as 125 times. The moves came after The Times reported how extreme leverage contributed to volatility. As if on cue, Bitcoin’s price jumped today on reports of a leveraged short squeeze.

Lucid Motors’ SPAC deal takes last-minute wrangling to get done. The merger had hit an impasse because not enough of the SPAC’s shareholders voted on it. Lucid’s C.E.O. and Michael Klein, the creator of the SPAC, eventually persuaded enough to do so, and the rechristened company will begin trading today. It’s another reminder that relying on retail investors can be risky.

The F.T.C. wants more time to sue Facebook. The regulator is up against a 30-day deadline to refile a recently dismissed antitrust suit against the company and is asking a federal judge for an extension. The Biden administration’s antitrust team plans to take big swings at corporate titans, but there are limits to its power without new legislation.

There’s no bigger story in home fitness over the past few years than what Peloton did for cycling. Now Bruin Capital, the sports-focused investment firm, is betting that golf is ripe for a similar sort of treatment.

Bruin is buying a majority stake in Full Swing, a maker of sports simulators, at what DealBook hears is a $160 million valuation. Founded in 1986, Full Swing is best known for room-filling golf simulators that let golfers practice their swings and putts using special cameras and projectors — and start at a budget-busting $40,000.

Bruin is betting on Full Swing’s new thing, a smaller training device that lets users track their swings and will cost about $4,000. (Its main pitch person is none other than Tiger Woods.) Bruin, which has invested before in sports-related technology, believes that Full Swing’s technology can create more at-home experiences that would feature more sports and generate steady revenues via subscription-based services.

The model is Peloton, whose stock skyrocketed during the pandemic as people bought its bikes — and, more important, paid for ongoing subscriptions. Other pandemic-era fitness winners include Strava, the fitness-minded social network, and Mirror, an exercise start-up that Lululemon bought for $500 million last year.

“He said, ‘Honestly, J, the way that I’ve seen that we work these kids, I’m not sure that I want that for you.’”

— Jamie Lee, quoting his father, the legendary JPMorgan Chase banker Jimmy Lee, who died in 2015. The younger Lee left banking this year to start a venture capital firm as the lure of investment banking fades for the youngest members of the work force, The Times reports. (DealBook also recently tackled the topic of junior banker burnout.)

Three of the biggest stories to watch:

▶︎ Robinhood trades on Robinhood. The stock trading app is set to price its I.P.O. on Wednesday, at a valuation of as much as $35 billion, and begin trading on the Nasdaq the next day. Robinhood plans to sell up to a third of its shares directly to its customers, which may stoke volatility. But the greater risk for Robinhood could be regulation. The company is facing nearly 50 lawsuits related to its decision to curb trading during the meme-stock trading frenzy early this year.

▶︎ The Fed wrestles with inflation. The central bank, which meets on Tuesday and Wednesday, is not expected to change its policies, despite inflation running at its fastest pace in 13 years. Jay Powell, the Biden administration and many economists think that price increases are temporary.

▶︎ Evictions resume. A nationwide ban on evictions will expire on Saturday. Some local and state governments, including California and New York, have their own eviction moratoriums that will remain in effect. Congress has allocated $45 billion for assistance to landlords and tenants, but rollout of the aid has been slow.

Tom Barrack, the founder and former C.E.O. of Colony Capital and a fund-raiser for former President Donald J. Trump — heads to federal court in New York today to face charges of failing to register as a foreign lobbyist, obstruction of justice and lying to investigators. A judge last week ordered Barrack to post a $250 million bond, one of the priciest in history, to secure his limited freedom. How did he raise so much money so quickly?

The bond is partly backed by about $150 million in stock in DigitalBridge, as Colony is now known, a Justice Department representative confirmed to DealBook. (That’s about 5 percent of the company’s shares.) Barrack also offered $5 million in cash, being held by his lawyer, and several properties. Barrack agreed with DigitalBridge that his stock can’t be sold, transferred or encumbered while he’s free on bond. The company declined to comment.

That exposes the government to swings in the value of the shares, and possibly ownership in the investment firm. One entity that the government won’t be taking a stake in is Barrack’s SPAC, which pulled its registration last week.

At what price freedom? Critics of the cash bail system say that it disproportionately hurts the poor and favors wealthier defendants, highlighted by Barrack’s case and other high-value bonds that came before it:

Best of the rest

We’d like your feedback! Please email thoughts and suggestions to [email protected]