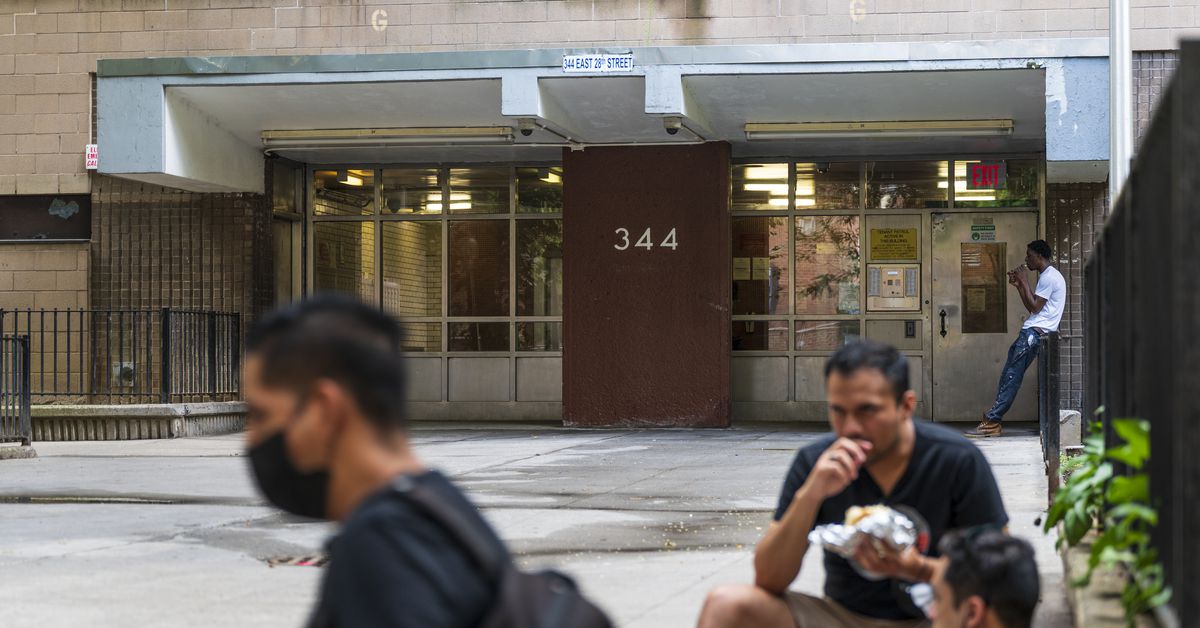 When the New York City Housing Authority turned over hundreds of public housing apartments in Manhattan to a private management company last fall, the new managers were required to clean up any lead paint hazards lingering on the walls.

In June, the managers sent tenants notices that Harley Plumbing & Heating LLC would soon arrive to repair leaky water pipes — and that Harley’s owner, Steven Kofsky, was qualified to supervise any lead paint remediation if necessary.

To make sure the residents knew they were on top of their game, the company, Monadnock Development, provided tenants with Kofsky’s official documentation certifying that he’d been properly trained and registered as qualified to deal with lead paint by the federal Environmental Protection Administration (EPA).

There was only one problem: Kofsky’s EPA certification had expired in 2011 — 10 years earlier, according to federal officials.

This is just one of several behind-the-scenes problems recently surfaced in NYCHA’s controversial effort to fix up its aging portfolio by turning over management of buildings to the private sector, via an Obama-era program known as Rental Assistance Demonstration (RAD).

Under the city’s version of RAD, NYCHA retains ownership of the buildings but transfers management over to the private sector — a necessity, supporters of the program say, to repair the crumbling public housing system. The new managers are required to certify that living conditions will continue to meet all city, state and federal requirements.

But as THE CITY recently reported, that isn’t happening in all cases.

Last fall, investigators working for the federal monitor who oversees NYCHA found toxic mold hidden behind newly installed drywall as Monadnock last summer sought to bring one of its Manhattan developments up to regulatory par, according to the monitor and records obtained by THE CITY.

That was at Washington Heights Rehab, one of a group of developments transferred into RAD in December known as the Manhattan bundle. After the monitor let NYCHA know about the mold issue, the authority promised increased oversight at all RAD properties going forward.

But THE CITY has found that problems at the Manhattan bundle go beyond mold — and include the uncertified lead paint supervisor and use of an asbestos contractor with a track record of violations. That raises serious questions about whether NYCHA has been on top of the situation there and is only now beginning to crack down as problems emerge.

Several Brooklyn elected officials, all Democrats, recently demanded that NYCHA pause its next round of RAD transfers in their districts.

State Sen. Zellnor Myrie, Assemblymember Latrice Walker and City Councilmember Alicka Ampry-Samuel want NYCHA management to document how they’ve informed tenants about RAD’s effects — and disclose what, if anything, they’ve been telling them about the problems with the Manhattan bundle.

“Your investigation revealing a coverup of really a life-or-death proportion completely eliminates the credibility they have on the issue — completely invalidates their explanation on this issue,” Myrie told THE CITY.

“That is unacceptable. The whole premise of RAD is that the private developers are supposed to be able to deliver repairs in a more efficient way than NYCHA. If your position is you didn’t know and then you covered up, that eliminates the entire premise of why we should use this (RAD) protocol in the first place.”

“It is so contradictory to the presentation that is given to the community and the elected officials,” he added.

This contradiction is particularly evident with the Manhattan bundle, a group of developments containing more than 1,700 apartments.

The developments, scattered from Kips Bay to Upper Manhattan, were turned over in December to a joint venture of Monadnock and non-profit financiers called PACT Renaissance.

One of these developments is a 26-story residential tower on East 28th Street.

The 225-unit building opened in 1971, when lead paint was still in use. But NYCHA put the tower on a list of developments deemed “clear” of lead paint after random sampling of some apartments.

In 2018, however, federal prosecutors revealed that NYCHA managers had for years falsely claimed that they were inspecting and cleaning up lead paint as required by city law and federal regulations. In response, Mayor Bill de Blasio ordered reinspection of 134,000 units — including those on East 28th St.

Last year, ACL Environmental, a vendor hired by NYCHA, detected the presence of lead paint inside some apartments there and in common areas. Thirteen of 2,171 tests on multiple surfaces in 27 apartments registered lead, along with 61 of 993 tests in common areas, such as the lobby.

PACT Renaissance/Monadnock took over the building in December, and in June it announced that “emergency” work on two water lines was necessary.

The job required breaking into ceilings and walls to get access to the bathtub trap and waste line in up to 52 apartments. Because this would disturb existing lead paint, EPA-certified workers had to supervise the job.

The documents sent to tenants about the project state that Kofsky was last certified by the EPA as a lead paint supervisor in 2005, and that he took a refresher course as required in 2007. However, John Senn, an EPA spokesperson, told THE CITY refresher certificate expired on Feb. 16, 2011.

“That is the most recent information regarding Mr. Kofsky’s certification status in our records,” Senn said.

Kofsky did not return a call from THE CITY regarding the expiration of his EPA certification.

Tom Corsillo, a spokesperson for PACT Renaissance/Monadnock, wrote in an emailed response to THE CITY that Kofsky did not supervise the work at E. 28th Street, although he confirmed that Kofsky’s firm, Harley, did the plumbing work there.

Corsillo at first contended that PACT Renaissance did not “convey to any resident that he would be supervising lead abatement work.” But when shown the EPA certificates for Kofsky sent to tenants, he wrote, “If Mr. Kofsky’s certificates were sent to residents, that was done erroneously.”

Though the letters to tenants included a pamphlet about the hazards of lead and noted that a contractor would be performing dust wipe sampling for lead, Corsillo wrote that “the work in question was not and did not involve lead abatement.”

He stated that the lead paint work performed there was strictly precautionary, noting, “Any activity that disturbs more than two square feet of paint in pre-1978 housing, including opening ceilings, requires that contractors performing such work have in place” be EPA approved to do the work.

He said two other firms, Sarahana LLC and JoGo Enterprises, handled opening and resealing the walls, and both had up-to-date EPA certificates, although neither had supervisory certificates, according to the records sent to tenants.

Thomas Hillgardner, a lawyer for tenants at East 28th Street, said PACT Renaissance sent Kofsky’s certificates to tenants after residents raised questions about who would be doing the work. He questioned why the new managers would do that if, as they contend, Kofsky wasn’t supervising lead paint abatement there.

“It was understood by tenants that these were the certifications of the workers who would be doing the work,” Hillgardner said. “There was no reasonable other way to view this. Why else would they be enclosing those certification documents along with the access letter?”

Another issue at East 28th St. involved a contractor called NexTek Solutions brought in in June to remove asbestos from the lobby and breakroom of the building. The tenants were notified that NexTek would be doing this work, but they were not provided any information on the company’s track record.

Records filed with the city Office of Administrative Trials & Hearings (OATH) show NexTek has been cited by the city’s Asbestos Control Program with 14 separate violations at 12 buildings around the city within the last year.

The violations range from failure to provide a third-party air monitor to ensure asbestos dust is contained during work to hiring uncertified laborers to do the work, the records show.

Since spring 2020, the city Department of Environmental Protection has hit NexTek with $66,000 in penalties. Records show most remain unpaid as of last week, with hearings scheduled for later this year. In one case, OATH records show NexTek had defaulted on violations that the city says occurred at a building in Staten Island.

On Wednesday, a man who refused to provide his name but said NexTek was “my company,” said the firm had performed work at the East 28th Street building in the boiler room but not in the common areas. He said NexTek had to “withdraw” from the job “because the tenants were nuts.”

He acknowledged the violations but said hearings on each one are pending. He threatened to sue THE CITY for filing “false information” and then hung up.

Asked if PACT Renaissance was aware of NexTek’s pending violations, Corsillo wrote, “NexTek is a fully licensed and insured asbestos abatement contractor, in good standing, and with appropriate certifications to perform its work. PRC reviews all contractors as part of its standard quality control and due diligence.”

Two tenants at East 28th Street have filed a lawsuit in Housing Court against PACT Renaissance and NYCHA alleging that the authority did not properly oversee lead paint and asbestos work. The suit also questioned why a certified mold inspector did not oversee the job when the walls were opened to repair the water leak in the two apartment lines.

The judge did not rule on the merits of the case, but instead found that Housing Court was not the proper venue for litigation and that the suit should instead be brought in state Supreme Court.

On Wednesday, attorney Hillgardner took the first step in that regard, filing a Freedom of Information lawsuit in Manhattan Supreme Court demanding NYCHA turn over all its communications with PACT Renaissance on the lead issue, and release its investigation of the mold coverup at Washington Heights Rehab.

In response to THE CITY’s questions about East 28th Street, Rochel Goldblatt, a NYCHA spokesperson, wrote in an email, “While we cannot comment on the specifics of pending litigations or investigations, NYCHA takes all allegations very seriously and investigates all complaints.”

On the issue of lead paint, NYCHA is required to certify that lead paint issues are fully addressed in any development placed under private management and submit a “clearance report” to the federal monitor overseeing the nation’s largest public housing system.

As of last week, NYCHA had yet to submit such a report on any of the 1,700 apartments that have been under private management since December. The same holds true for another set of 2,600 apartments scattered across Brooklyn that went into the RAD program in February 2020.

Regarding the clearance reports, Goldblatt wrote that NYCHA will provide a clearance report to the monitor “once all abatement has been completed, likely around the same time that construction is substantially completed on the project, if not before.”

She wrote that work on the Manhattan bundle is expected to be complete by mid-2023, and added that all PACT partners are required to follow “all applicable regulations” regarding dealing with lead paint.


Get THE CITY Scoop